Orphaned at age 10, Bach moved in with his older brother Johann Christoph, anorganist at St. Michaelâs Church in Ohrdruf, a small town in the German state ofThuringia. Young Johann Sebastian was a quick study. Before he was out of his teens,he was in demand as a professional organist. Within a few years, he was the leadingorganist of his age. By all accounts, he was an extraordinary virtuoso, wowingonlookers with his fleet passagework and nimble feet, but he was also an expert onthe mechanics of the instrument. He was often asked to try out new organs and tunethem to his exacting specifications, and he took an obsessive interest in the acousticproperties of the halls and churches that housed the instruments.


Although establishing firm dates is often impossible, Bach probably composed mostof his major organ works between 1708 and 1717, when he was court organist forDukes Wilhelm Ernst and Ernst August in Weimar. During those years he producedthe Orgelbuchlein (The Little Organ Book); working drafts of the âGreat 18âChorales; most of his finest surviving preludes and fugues; and countlesstranscriptions of Vivaldi concertos.

His Prelude and Fugue in E Minor seems to have been completed several years later,however, most likely between 1727 and 1736, when he was working in Leipzig.Somewhat unusually for Bach, the autograph fair copy of the score still exists,although the handwriting changes to that of a student–copyist 22 measures into thefugue.

A Closer ListenRanked by Franz Liszt as one of Bach’s six greatest works in its genre, BWV 548 is amaster class in organ writing. The prelude is both elaborate in its detail and grand inits scope. Likewise, at 231 measures, the fugue is one of Bach’s most intricate andmonumental. The work’s nickname, “the Wedge,” refers to the first half of the fuguesubject: as the idea develops, following a characteristic pattern of descendingchromatic fourths, Bach seems to create a kind of musical “wedge” against the homekey, butting up against it to create more harmonic space. The fugue is organized inthree parts, but the third is a note–for–note repetition of the first. The central sectioncontains most of the daunting toccata–like passagework.

Nicknamed the “Dean of African–American composers,” Still wrote more than 150works, including eight operas and five symphonies. He was the first Black Americanto compose a symphony that was performed by a major orchestra, and the first toconduct a major orchestra. In 1949 his opera about Haiti, Troubled Island, wasproduced by the New York City Operaâanother historic first.
Still was born in Woodville, Mississippi, to college–educated teachers. His father, thetown bandmaster, died when he was three months old. He and his mother moved toLittle Rock, Arkansas, where she remarried. He began taking violin lessons at age 14and taught himself viola, cello, double bass, clarinet, oboe, and saxophone. In 1911he enrolled at Wilberforce College in Ohio, where he directed the band. His studiesat Oberlin Conservatory of Music were interrupted by a stint in the Navy. Aftercompleting his service, he played as a sideman for blues legend W.C. Handy, whobrought him to Memphis and then New York City, where he became an oboist inEubie Blake’s pit and made arrangements for theater orchestras and jazz and bluesartists. He also studied with the influential atonalist Edgard VarĂšse.
Reverie was a commission by the Long Beach, Los Angeles and Pasadena and ValleyDistricts Chapters of the American Guild of Organists in Celebration of the A.G.O.National Convention July 2â6, 1962. About four minutes long, the piece mixesseveral seemingly incompatible musical idioms into a coherent original language.Still’s melodyâmeandering, melancholy, through–composedâevokes AfricanAmerican spirituals, but the dreamy harmonies and textures sound intenselyFrench.
Guillou was a true polymath: a composer, organist, pianist, poet, author, andteacher. He was only 12 when he was appointed organist at the church St. Serge, inhis native Angers. Later, at the Paris Conservatoire, he studied with Marcel DuprĂ©,Maurice DuruflĂ©, and Olivier Messiaen, three titans of the French organ tradition. Inthe mid–50s, Guillou taught organ and composition at the Institute of Sacred Musicin Lisbon and began writing music himself. In 1958 he moved to Berlin to obtainmedical treatment for a chronic condition. During these years he continued tocompose original music and made his first recordings at Lutherkirche and St.Matthias Church.
In 1963 he returned to Paris. For the next 52 years, until 2015, he served as titularorganist at Saint–Eustache in Paris, where he was known for his brilliantimprovisations and distinctive transcriptions of composers whose works mighthave otherwise seemed ill–suited to the organ repertoire. He strongly believed thathis instrument belonged in concert halls as well as churches and cathedrals, and heoften performed internationally: in 1966 he played Max Reger’s Fantasia and Fugueon BACH, Op. 46, at the Berlin Philharmonie, to commemorate the 50th anniversaryof Reger’s death.
Guillou composed more than 90 works for organ, orchestral, and chamber music,and made many transcriptions, as well as more than 100 recordings. He alsopublished several books, including collections of poetry.
Guillou wrote the complex and technically challenging Ballade Ossianique, No. 2 in1971 and revised it in 2005. He dedicated it to Cherry Rhodes, his former pupil andassistant for two years at Saint–Eustache.
The Composer Speaks“The present composition, recast several times, represents the final version of whatwas originally, like some of the Sagas, one of my recorded improvisations. After theongoing growth of a note from pianissimo to the fortissimo of a chord thrust out likea cutting sword, undulating phrases conjure up a landscape shrouded in mist. Theongoing note appears, and soon isolated notes, falling like drops of rain in a cave,seem to constitute the outline of a melodic figure in embryo. This latter, afternumerous episodes of expectancy and sometimes menacing solitude, graduallytakes shape, as though feeling its way through the darkness. Periodically,developmental passages are interrupted by the insistent note, which each timeseems keen to push back the hostile forces. The thematic cell, the sole cellconstituting the constructional element of the whole work, now flares up and breaksthrough the innumerable shifting forces. At last a kind of transfiguration takes placein this torment, giving way to a concluding hymn full of enthusiasm andjubilation.”âJean Guillou
Walter began composing music in high school, starting off with musicals. He earnedhis MFA from the State University of New York at Buffalo, where he studiedcomposition with Morton Feldman and William Kothe.
In addition to being a teacher and composer, Walter also serves as a pastor for twoparishes in Fredonia, New York.
Rhodes has debuted other works by Walter, including Variations on Salve, Festa Diesfor Two Organs (1999) and the related Meditations on Salve, Festa Dies, for organsolo (2002). With Rhodes in mind as organist, Walter spent three–and–a–half yearswriting the Chorale, Diferencias and Glosas on Puer Natus in Bethlehem, completingthe work in 2016. He was inspired by a 13–century Gregorian chant, a Christmashymn.
In a telephone interview published in the New York Observer around the time of thepremiere, Walter remarked that Rhodes is “a virtuoso, and it takes a virtuoso to playthe piece, as it’s not an easy piece to perform.” The Diferencias (similar to adevelopment section in sonata form) and Glosas (ultra–embellished variations) aremusical procedures associated with Spanish Renaissance composers such asAntonio de Cabezon. Among the many delights in this vivid and virtuosic 17–minutework is a pedals–only cadenza.
The Composer Speaks
âWhile the work is not intended to be programmatic, one may look upon it as looselyreflective of the hymnâs ideas and sentiments. These embrace both the tenderness ofthe newborn Babe, who is Divine Love made visible, and the power of theIncarnation, which restores order to the cosmos, bringing salvation to a worldsorely in need of redemption.â

“I came into the world almost completely blind, on account of which my parents felta very keen chagrin,” Vierne recalled. With the aid of a powerful magnifying glass, hestudied counterpoint under CĂ©sar Franck, whom he first encountered at age nine,when the older man’s powerful performance at Sainte–Clotilde inspired Vierne tobecome an organist. After the death of his first mentor, he turned to Charles–MarieWidor, another giant of the French symphonic organ tradition. Although Viernebecame a revered professor himself, he still showed Widor drafts of everything hecomposed well into his late 30s.

From 1900 until his death, Vierne served as principal organist at Notre DameCathedral, in Paris. The state–of–the–art CavaillĂ©–Coll instrument, with itsunprecedented range of registrations, fully exploited the tonal possibilities of theevolving French “symphonic style.” Vierne’s six organ symphonies are hallmarks ofthe genre. His PiĂšces de fantaisie, four six–movement suites, were composed in 1926and 1927 for his wildly successful American tour. “Claire de lune” comes from SuiteNo. 2, where it serves as the penultimate movement. Although Vierne greatlyadmired Claude Debussy, this long, highly expressive Adagio in D–flat major isn’tespecially indebted to the more famous piano piece by that name.

Although many critics consider him the greatest composer of organ music since J.S.Bach, Reger is somewhat neglected today. Born in Brand, Bavaria, he received hisearly training from a Weiden organist, Adalbert Lindner, who recommended him tohis own former master, Hugo Riemann. Under Riemannâs tutelage, Reger immersedhimself in the study of counterpoint and other formal procedures, poring overBrahms and Bach scores to master the nuances of variation, fugue, and fantasia. Hefinished his studies and then taught music theory until his compulsory year ofmilitary service began in 1896. After a few years recuperating from this experience,which he found highly traumatic, he moved from Weiden to Munich, where hetaught music and launched a pointless and polarizing campaign against Riemann,his former master. He called this harsh rhetoric a âwar of progress,â but it certainlydidnât take his career very far.
During this period (roughly the first decade of the 20th century), Reger wrote manymajor organ compositions. Intensely chromatic, with smeary chords and abruptmodulations, they are notoriously difficult. Unsurprisingly, they werenât verysuccessful, either commercially or critically. They did, however, bring Reger his
most important disciple: the organist Karl Straube, who almost single–handedlyensured their place in the organ virtuosoâs repertoire.
With the assistance of Straube, Reger completed his Fantasie und Fuge in D Minoron March 1, 1916. The 43–year–old composer died of a heart attack in a Leipzig hotelroom two months later, before the work’s premiere and publication. Dedicated toRichard Strauss, the Romantic, technically tricky diptych is one of his lastcompositions. The Fantasie presents the main theme, decorated and in differentvoices. The Fugue consists of two contrasting parts: one somber and somewhatdense, the other lively and transparent. Reger’s original manuscript bears ahandwritten note by Elsa Reger, the composer’s wife: “In memory of my deargodson Max Hanfried Poppen, from Frau Max Reger, Munich April 1937.” 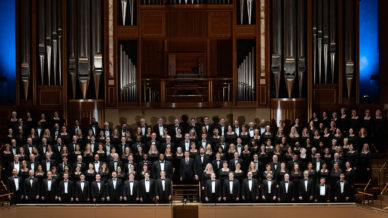