Read More.
Back to Gary Levinson 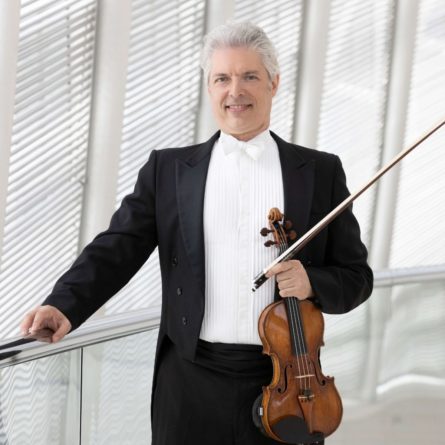 Gary Levinson is the Senior Principal Associate Concertmaster of the Dallas Symphony Orchestra and the Artistic Director of the Chamber Music Society of Fort Worth. Chosen by Zubin Mehta to join the New York Philharmonic before the completion of his undergraduate degree from the Juilliard School in 1988, Mr. Levinson made his New York Philharmonic solo debut in 1991, under the baton of Erich Leinsdorf, coinciding with the completion of his Masterâ€™s of Music degree at the Juilliard School, where his teachers included Dorothy DeLay, Glenn Dicterow and Felix Galimir.

Born in St. Petersburg, Russia, Levinson began studying the violin at the age of five with Professor Sergeev at the Leningrad Special Music School. After immigrating to the United States in 1977, he won the top prize at the 1986 Romano Romanini International Violin Competition in Brescia, Italy, as well as becoming the top American Prize winner at the 1987 Jacques Thibaud International Violin Competition in Paris, France.

The summer season takes him to various music festivals, such as the Strings Festival in Steamboat Springs, Colorado, The Josef Gingold Festival in Miami, Florida, the Summit Music Festival in Purchase, NY and the San Miguel de Allende Music Festival.Â  He served on the faculty of the Aspen Music Festival from 2001-2010. Outside of the US, he was featured in Audition Perform in Chichester, United Kingdom, the LacMus Festival in Italy, the Banhoff Rolandseck Festival, Germany, China and South Korea.

A champion of contemporary music, Mr. Levinson commissioned and performed the world premiere performance of George Tsontakis Violin Concerto No. 3 in 2020. Hrecorded the Margaret Brouwer Violin Concerto under the baton of 2012 Musical Americaâ€™s Conductor of the Year, Jaap van Zweden in 2012. He premiered and recorded several works dedicated to Mr. Levinson by award winning Iranian composer, Behzad Ranjbaran. In 1996 he, along with his father, renowned double bassist Eugene Levinson, recorded the world premiere for CALA Records of Dances of Life, a bass and violin duo, written for and dedicated to the Levinsons.Â  Mr. Levinson also collaborated with New York Philharmonic Principal English Hornist Thomas Stacy in a CD for CALAâ€™s New York Legends series.

The complete Beethoven Violin and Piano Sonatas with acclaimed pianist Daredjan Kakouberi were released in August, 2011. The Vivaldi Four Seasons and the Brouwer Violin Concerto were released in 2013. His CD, My New York Years, debuted to critical acclaim in January 2007.Â  In the summer of 1999, Mr. Levinson completed a critically acclaimed all Mozart CD, featuring the Elysium String Quartet and three then New York Philharmonic principals – Stanley Drucker, clarinet, Joseph Robinson, oboe and L. William Kuyper, Horn. The American Record Guide hailed it â€śutterly Mozartean…full of good spirits and a real sense of occasionâ€ť.Â  The CD is currently available.Â  In the summer of 1999, Lucas Foss chose Mr. Levinson and the ESQ to collaborate with him on an all-Bach CD of works never before recorded in that artistsâ€™ distinguished career.

Mr. Levinson performs on an Antonio Stradivari violin, crafted in 1726. It is graciously made available for his use by the Dallas Symphony Association.